Going green is great—but Hank found you could get burned. You won’t believe what happened when some Massachusetts homeowners signed solar panel deals and then discovered surprising financial strings attached. Hank Investigates.

These are the rooftops of Massachusetts, North Shore, South shore–and as you can see from Sky 7 many of them these days have something in common: New solar panels, with more going up every day.

This is Joanne Gardner’s house in Beverly, she leases her panels from a solar company. The Gardner’s hoped going green would cut their electric bill, and it did.

So Joanne’s happy with her panels, but not the financial surprise that came with them.

When she applied for a federally-insured reverse mortgage on her home, the lender denied it saying, “the solar panel issue cannot be resolved.”

Joann Gardner, Homeowner: “I was shocked.”

The solar panel issue? Our investigation found it’s a doozy. The leasing contract you sign may mean: If you want to sell your home, or get a home equity loan, or get a reverse mortgage, you may not have complete financial control over your own home!

Rhonda Siciliano, U.S. Dept. Housing and Urban Development (HUD): “I’m thankful that you’re doing this because it’s good for people to be aware.”

Here’s JoAnne’s 20-year leasing contract, it says if she wants to sell her house with the solar lease, the solar company has to approve the new buyer.

Otherwise, she has to buy the panels, which she told us would cost more than twenty thousand dollars.

But what it doesn’t say, because of that, Federal Housing Administration regulations prohibit the FHA from okaying her loan.

Hank: “Even if a homeowner read that contract thoroughly, they wouldn’t know that?”

Rhonda Siciliano, HUD: “Unless, you know, they had studied the FHA regulations they probably wouldn’t, no.”

And this could be a problem for anyone with certain leased solar panel contracts who applies for the millions of federally insured mortgages and loans the FHA handles.

Hank: “So if a homeowner has leased solar panels with those restrictions the Feds are going to say no?”

Other angry homeowners who’ve leased their solar panels complain they’ve had trouble getting home equity loans through their banks.

Here are why: Their solar companies attached these UCC financing statements to the home’s records at the registry of deeds. We found thousands of them in Massachusetts. They’re an alert that the owner of the house has a leasing contract, and though the homeowner owns the house, the solar company owns the panels. Officials told me when some lenders or banks discover that, it could cause a problem.

Hank: “Do you think homeowners know this?”

The solar industry knows it.

Chet McGensy, Solar Energy Industries Association: “Yes, across the country there have been consumers who have had problems, or challenges obtaining loans.”

But solar trade association officials told us it’s because the industry is so new. They say the Feds are misinterpreting their own regulations, and insist customers should not be denied loans just because they lease solar panels.

Hank: “So right now is there some confusion here?”

Chet McGensy, Solar Energy Industries Association: “Oh, absolutely, I think there’s absolutely some confusion, and the solar industry is dedicated to continually working with the agencies to clarify those issues.”

Says she’s all for going green, as long as there’s sunshine on every transaction.

Maura Healy, Massachusetts Attorney General: “We just want to make sure that disclosures are made and nobody gets hurt in the process. Especially that nobody gets surprised.”

Now after our story, the Attorney General’s Office and Southern Essex County Registry of Deeds now tell us they are putting out consumer advisories.

Under current FHA policies, a borrower who has leased the solar panels on his home may be eligible for an FHA-insured mortgage (including a Home Equity Conversion Mortgage, known as a HECM) provided the solar panel lease does not contain any restrictions that either prevent the borrower from freely transferring the mortgaged property or that limit the assumability of the mortgage beyond applicable FHA guidelines. This restriction is found in FHA’s regulations at 24 CFR 203.41.

HUD has an FAQ on this subject: http://hudgov.prod.parature.com/link/portal/57345/57355/Article/8427/Is-a-home-with-a-leased-energy-system-or-power-purchase-agreement-eligible-for-an-FHA-mortgage

HUD says: Under our current guidance, the Massachusetts homeowner who applied for a HECM (an FHA-insured reverse mortgage) had a 20-year lease on the solar panels on her home. Her contract required her to obtain the solar leasing company’s approval of any prospective buyer, which limited the homeowner’s ability to transfer her home and this would not comply with our requirements at 24 CFR 203.41.

Different solar companies have different contracts. The Solar Energy Industry Association (SEIA) says: “It’s very important that the contract is based on the solar industry’s standard contract template, available on SEIA’s website http://www.seia.org/research-resources/nrel-model-leases-ppas. The solar industry is constantly in contact with the major housing regulators, banks, and title companies to ensure that the standard contracts are compliant with all laws and do not limit a customer’s ability to sell or refinance their home. Incidents like the one you are describing should not happen, and we encourage all solar companies to adopt the SEIA contract templates and for customers to ask their solar provider if they are using the standard contracts.”

This is a link to SEIA’s consumer guide to solar power:
http://www.seia.org/research-resources/residential-consumer-guide-solar-power

From the Solar Blog 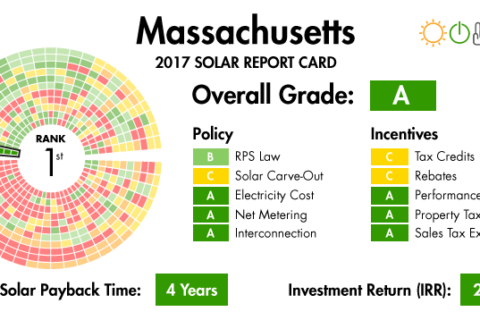 Solar research and advocacy group Solar Power Rocks released its 2017 ranking of the states most friendly to rooftop solar Friday,…